Sorry — Your browser is not supported by MustHaveMenus.

What are the best delivery apps for restaurants?

How delivery services like GrubHub and DoorDash can help your business

If you’re operating a restaurant, you’ve probably faced the question of whether or not you should partner with a third-party delivery service. It’s a growing industry that shows no signs of slowing down in a society increasingly built around not having to leave the comfort of your home. According to a report from Allied Market Research, the delivery service industry generated $3.79 billion in revenue in 2017, and is projected to climb to $16.61 billion in 2023.

Delivery apps aren’t going away, so you need to decide if partnering with one is right for you and your business.

How do delivery apps work?

Third-party delivery companies like Grubhub and Postmates connect consumers to your restaurant through their mobile apps. Consumers can access your menu, place an order from their phone, and the delivery service will pick up the food and deliver it from your kitchen to their doorstep.

The majority of the costs are passed onto the customer, but restaurants are hit as well. Grubhub, the biggest player in the market, takes 15% of the order as a commission for non-sponsored listing, plus a 10% delivery charge. At minimum, you’re sacrificing a quarter of your sale, which can be tough in an industry that already works on razor-thin margins. Those are the industry standard rates, but they can fluctuate depending on your location, population and restaurant density.

You can also sacrifice higher commission percentages for a sponsored listing, which comes with perks like higher visibility in the GrubHub search for your region. Access to the top spots on their home page often lead to bidding wars where restaurants sacrifice larger and larger percentages of their sales in hopes of increasing their market share.

Should you partner with a delivery service?

If you’re actively looking for new customers and don’t already have your own delivery infrastructure in place, you should strongly consider using a third-party app. 44% of all restaurant sales now come from delivery and pickup, with the numbers skewing towards delivery year over year, especially for 18-30 year-olds who now order their food delivered 30% of the time. With 63% of young adults using third-party delivery apps, there’s a growing consumer base that you’ll miss out on if you stand pat.

If you can, establishing your own delivery service gives you access to that market without having to split profits with a third-party. If you already deliver your own food but still want customers to have the option to access your menu through Grubhub, the company will waive the delivery charge and only take the listing commission (which can be as low as 15%). While not realistic for every restaurant, building your own delivery infrastructure gives you the best of both worlds.

If your restaurant already turns a tidy profit and enjoys lines out the door, then partnering with a third-party app may not be worth it. The added pressure of fulfilling delivery orders can push restaurants already pressed for time over the edge. Some delivery apps, most-notably Postmates, have been known to sign up restaurants for their service without the restaurant’s permission. This can put a strain on owners who find themselves dealing with deliveries they did not anticipate, and the subsequent fallout from customers who blame the restaurant when the deliveries fall through. Some owners are also wary of being represented in any capacity by an outside party and are seeking legal action against Postmates.

Who are the biggest delivery apps?

>Founded in 2004, GrubHub enjoyed a huge headstart on its competitors. As a result, it’s held a huge market share of the delivery industry for the last decade. They have 19.9 million active users and partner with 115,00 restaurants. They’ve also acquired several smaller delivery services, including Allmenus, Seamless, Restaurants on the Run, and Tapingo. While they’re still the industry standard, GrubHub has been losing ground to Postmates and DoorDash, the latter of which just passed them for largest market share. A nationwide survey found that 38% of adults still prefer GrubHub as their number one choice.

Started in 2011, Postmates has been steadily growing and now operates in over 2,000 US cities. Postmates initially differentiated themselves by delivering more than just food. The founder conceived it as a way to turn the entire city into a warehouse accessible from your home. In recent years, though, Postmates has gravitated more and more towards food and alcohol deliveries. In May, 2019, Postmates changed their pay structure to eliminate a minimum guarantee for its drivers. Initially, Postmates guaranteed its drivers $4 per delivery. Postmates drivers do keep 100% of their tips, though, unlike other services like DoorDash.

Founded in 2013, DoorDash has exploded onto the scene, growing 175% over the past year to supplant GrubHub as the most popular delivery service. They now account for 34% of the nation’s delivery sales. DoorDash recently underwent their own controversy when it was discovered that they were subsidizing their drivers’ tips against their minimum guarantee payment.

If you create your menu with MustHaveMenus, you have the option to publish a Google-friendly text version of your menu online. These menus are already stripped of their formatting and design elements, so it’s fast and easy to transfer them over to a third-party delivery service app.

High-quality printing for menus, flyers, business cards, and all the essentials you need to run a successful restaurant.
Ships next business day!

Get a Print Quote

By creating an account you agree to our terms of service. How we protect your personal information. 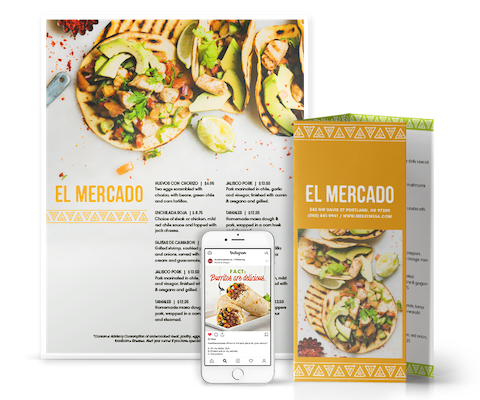 Have a coupon? Apply it here

Prices are in U.S. dollars. Your subscription will continue until you cancel. You can cancel your Professional Plan at any time from your Account page. No cancellation fees. By selecting submit you agree to this recurring charge.

How we protect your personal information

We sent you an email confirmation and detailed receipt.